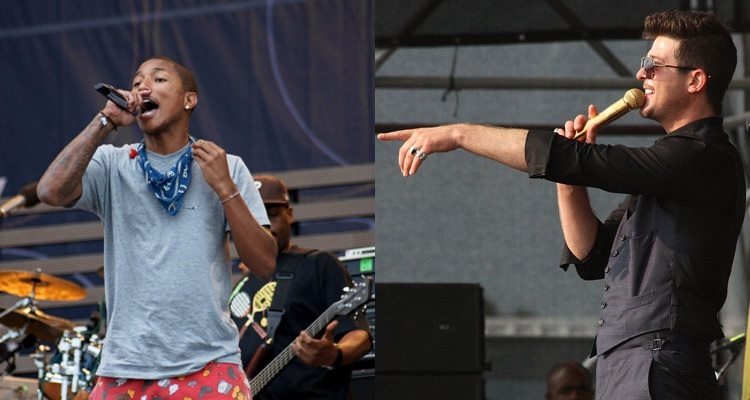 On Monday, a California Federal Judge ruled that Pharrell Williams and Robin Thicke will not have to pay Marvin Gayeâ€™s familyâ€™s $3.5 million in legal fees.Â Â The battle has been ongoing for some time and has finally come to a close.

However, the news comes as a surprise to many, as Williams and Thicke were found guilty of infringing one of Gayeâ€™s songs, and ordered to pay a massive $7.4 million to Marvin Gayeâ€™s children. Â Whatâ€™s interesting is that it was actually Williams and Thicke who kick-started the battle by seeking declarative relief from a judge that their song â€˜Blurred Linesâ€™ was not infringing of Gayeâ€™s â€˜Got To Give It Upâ€™.

Their lawsuit was reportedly filed way before Gayeâ€™s family even took it to court.

ThereÂ is reasoning behind Williams and Thicke being the first to take action. Â The preemptive strike is likely due to the fact that the duoÂ wanted to protect themselves from a massive case that would attract global attention, a plan thatÂ ultimatelyÂ backfired. Â By Williams and Thicke taking the first steps, it sparked the Gaye family to cross-claim and fight back with vengeance.

According to the Daily Mail, the Gaye familyâ€™s lawyer, Richard Busch said â€We did not start this fightâ€¦ Pharrell Williams and Robin Thicke started this lawsuit. We fought this fight with one arm tied behind our back.â€

The $7.4 million was a massive win for the Gaye family, so the extra $3.5 could be pushing it a little. Â Well, at least thats how the presiding judge in the ruling saw it. Â Â Despite popular belief, it isnâ€™t common in US lawsuits for the winning party to winÂ legal fees from the opposing side.