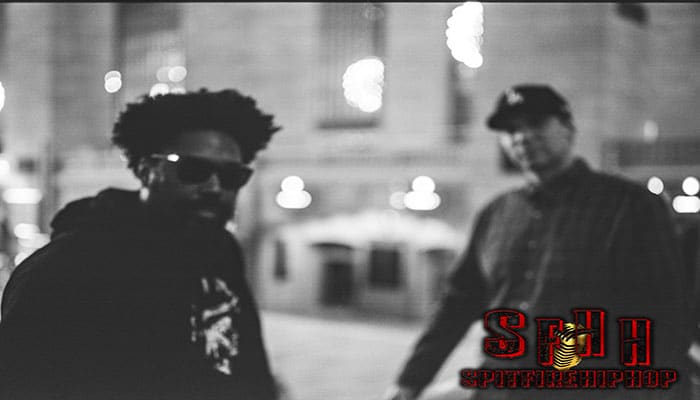 K. Gaines is preparing the release of his new EP titled ‘Ticket To Elsewhere’. He was kind enough to take a few questions about the EP and explained a few things about it.

Brooklyn emcee K. Gaines presents â€œOpulenceâ€, the first single fromÂ Ticket To Elsewhere, his forthcoming collaboration EP with Los Angeles-based producer Maxwell Benson dropping December on Priority/Capitol Records. Ras Kass, Lyric Jones, Phaze4K, Leo Coltrane and Sebastian Marciano are set to appear onÂ Ticket To Elsewhere, the first of five EPs K.Gaines plans to drop in 2018, each of which will be a collaboration with a producer from a different region of the US. Maxwell Benson has worked with Too Short, Rapper Big Pooh and Sadat X, and givesÂ Ticket To ElsewhereÂ its West Coast focus. Gainesâ€™ last album wasÂ Rumspringa: The Wildman ChroniclesÂ (Spotify) and starred in the short filmÂ Kung Fu BumÂ which was showcased at several film festivals.

Los Angeles visual artist Reef Kills providedÂ Ticket To Elsewhereâ€˜s cover art. The artwork for each EP in the series, once juxtaposed with each other, will form a more intricate visual piece with all the purpose and intention of a map which can lead you to hidden prizes around the country. â€œI was listening to a lot of Tribe Called Quest when I made this track,â€ Benson says about the new single. â€œI was really geeking out over their use of basslines and wanted to make my own version of that. Getting in the studio with Gaines is always an exciting venture. He has a secret method and ritual that has to happen before he lays all his vocals that only those that work with him know about.â€ Regarding â€œOpulenceâ€ Gaines says simply,â€Either you are with it or not. If you donâ€™t get it then it wasnâ€™t meant for you. If you get it â€¦welcome toÂ Ticket To Elsewhere.â€

Youâ€™ve put together an audacious long-term project rollout laden with hidden layers. Where did you get the idea for this?

K.GAINES: Yeah, the long-term project is something specialâ€¦scheduled to be released every three to four monthsâ€¦ itâ€™s a total of five EPs called BON RETOUR. Usually when someone embarks on a long journey, their send-off is â€œBon Voyage,â€ meaning â€œHave a good trip.â€ I took my trip and now Iâ€™m coming back so itâ€™s the â€œGood return,â€ aka BON RETOUR. Thereâ€™s a West Coast EP (Ticket To Elsewhere), East Coast EP(Ground Control), North EP (Envisage) And South EP (The Evolving). The fifth secret EP is a culmination of all four and you can only get the 5th one free if you purchased the other 4 EPâ€™s and solve the puzzle. Each EP is produced by a super dope producer from each region and the artwork is done by incredible artist form that area as well. The artwork will lead you on an Easter egg hunt which will lead you to the 5th EP, (it coMaxwell Bensonines all of the producers/artists) as well as some artwork to complete the puzzle. Go to www.1K.Gainesaines.com for all of the details. The idea came from the goal of doing something memorable and exclusive to my hardcore fans. With every project released, it has to be innovative as well as challenging to me, To push my boundaries creatively and to do something I havenâ€™t done yet.

Whatâ€™s the meaning behind the name Ticket to Elsewhere?

K.GAINES: Ticket to Elsewhere means I choose to get away from what most is expected of me. Iâ€™m tired of the nonsense and I need to escape or get away so I buy a ticket to elsewhere. With the â€˜Rumspringa The Wildman Chroniclesâ€™ album, I proved I can rap, now I am just showing my diversity and how I dope I am. Maxwell Benson and I linked and I told him my idea a few years ago, he challenged me with some raw, stripped down, industrial (think Nine Inch Nails- Dub Step- Run the jewels) production like drum and bass with a twist. Mind blown by his beats, I had to step up to the plate and hit a homerun. We got a dope artist from the West Coast Reef Kills (@reefkills) to do the cover art and now for you, the journey begins.

MAXWELL BENSON: For me when Gaines and I get together the process is different then Iâ€™ve experienced before with working with an artist. There is a lot of laughing, jokes and food and some place in there we decide to do a song and it usually has some influence on it of what we were just talking about. Gaines is super easy to work with in a collaborative sense and is really open in input and really has no ego around things which is super refreshing because I canâ€™t tell you how many time Iâ€™ve be in session and the lyricist knows all even when they donâ€™t wanna hear you give any input to make the project better.

What inspired â€œOpulenceâ€? Specifically, the choice of song name?

K.GAINES: The music/life/production influences my trajectory at all times with music. Maxwell Benson sent this beat and the first thing I felt was a gritty richness. Most people define opulence as the frivolous stuff, cars, clothes, money jewelry etc. so when they see the title and single art for this song, they kind of expect it to be on some money, hoes, cars, shit but then they find out what my definition of Opulence is. FREEDOM is the ultimate opulence for me.

Whatâ€™s your favorite non-rap album of all time and why?

K.GAINES: I donâ€™t do favorites. My opinion changes daily depending on my mood. There isnâ€™t a genre of music I havenâ€™t listened to intently. I respect writers and composers who can paint vivid pictures with words, music and vibes. Michael Franks, Marsalis Brothers, Jimi, Bob (Marley and Dylan) Bach, Mozart etc. the list is immense.

MAXWELL BENSON: Dillinja and Lemon D – Big Bad Bass: I have always have been fascinated with baselines and kind of geek around making them and playing with them. Dillinja and Lemon Dâ€™s basslines are the ultimate for me – the warmth and roundness they have is stupid good. If you play these on a dope club system and compare them to other records now days or in the past you see that these guys were really were bass scientists. Most of todayâ€™s current music be it hip hop or pop was all birthed from the drum and bass and grime scene in the UK. I love music that has a bassline that smacks you upside your head because itâ€™s so good. The compliment to that bassline is always the breakbeat element in Drum and Bass as it is in Hip Hop. I wished a lot when I was younger that I had grown up in the UK Drum and Bass scene. Donâ€™t be surprised if you have a Drum and Bass EP from me in the next while just for shit and giggles.

Which is your favorite of your five upcoming EPs and why?

K.GAINES: Ask me this question once all of them are released. As each one of them come outâ€¦they are my favorite. So now itâ€™s TICKET TO ELSEWHERE!! Haaa!!